Blast of Autumn by Bobbie Crane. Legend of Daphene by Patsy Granberg. 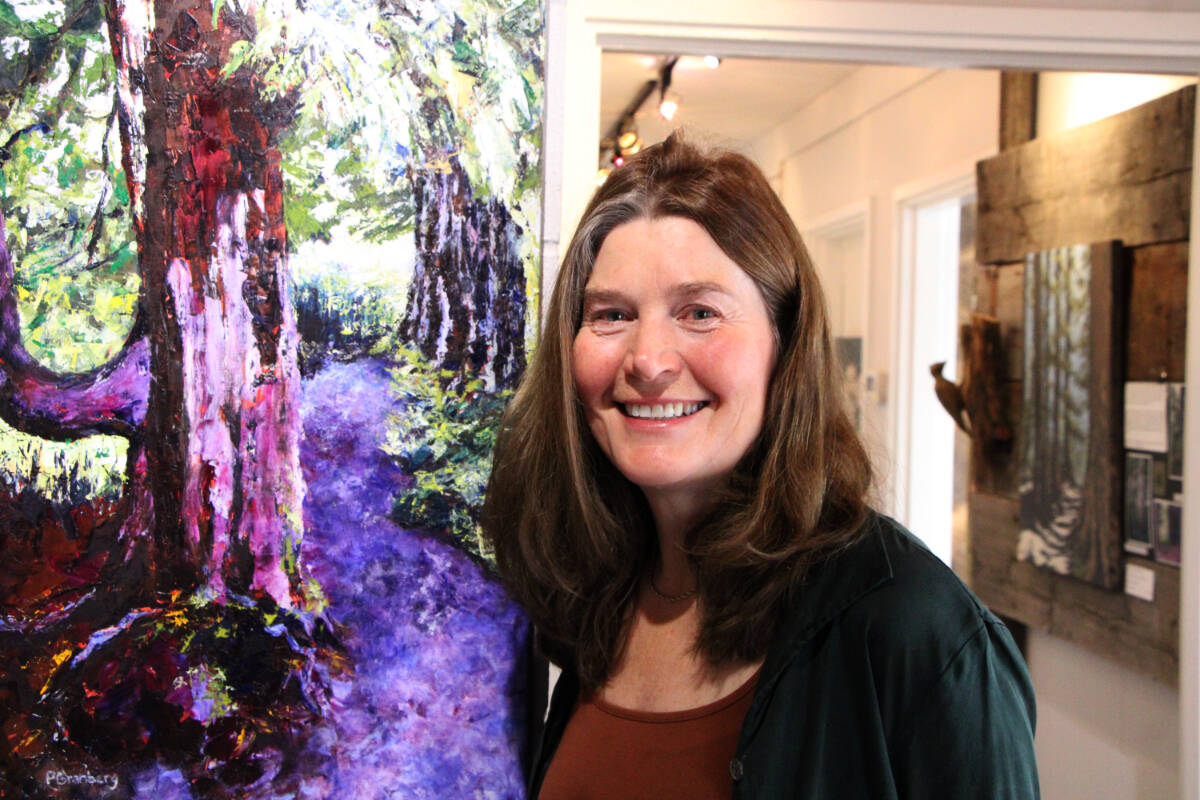 Patsy Granberg is one of 24 artists who contributed to Parkside Gallery’s new show Among the Trees. (Patrick Davies photo - 100 Mile Free Press) Living on the Edge by Dawn Miller. Our Afternoon Walk by Jess Thomas. In Glowing Colours by Neil Pinkett. Tree with Spirits by Claudia Ring. In the Early Morning Light by Bobbie Crane. The walls of Parkside Gallery turned into a colourful forest for Among the Trees.

This year’s community group show features the works of 24 different artists from across the South Cariboo. Cariboo Artist Guild member Patsy Granberg said both guild members and non-guild members are represented in this latest show.

“Once a year we try to bring in the community and this year the theme spoke to a lot of members,” Granberg said. “There’s a variety of paintings, mixed media and carvings on display. I think it’s a beautiful show.”

Many of the artists used the show as a chance to try new paintings techniques, including Granberg. She embraced a long running interest in black light paints to create the Legend of Daphene.

“As a teenager in the 70s I was just inspired by black light paintings I’d seen and I always remembered one of a woman in a tree,” Granberg said. “So I wanted to do a take on that.”

The vivid technicolour piece is unlike any other in the show and has been placed in a closet with black lights to give the complete effect. Its success influenced Mother of Trees, a more traditional acrylic piece she did for the show. Granberg said that while it lacks the fluorescence of black lights its much more colourful than her usual paintings.

Acrylic artist Neil Pinkett said the theme of the show was also an easy one for him to get into. Trees have consistently been one of the main subjects of his paintings for years in landscapes and forest scenes.

“I love to paint and painting trees come naturally to me,” Pinkett said. “I enjoy the shapes of trees. I like painting crooked trees and lofty trees, they’re just an interesting subject.”

For Among the Trees Pinkett painted four paintings, two of which showcase aspens that grow near his home. He also took inspiration from the aftermath of a fire near the Marble mountain range to paint Skeletal. The painting features a raven flying through a burnt forest and is something a little more sombre than Pinkett’s usual works.

Pinkett said he’s a big fan of themed group shows as he enjoys seeing how different artists approach a shared theme. Granberg agreed, noting that many people in today’s society are thinking about trees.

“It was a chance for some creative reflection about trees,” Granberg said. “I think at this point in our lives we’re all in a reflective state of mind about the environment in general and the part the trees play in our continued wellness.”

Among the Trees runs at Parkside until Oct. 8.

James Cameron turns to Earth before release of new ‘Avatar’